I'm a content writer and it takes up all of my time.

Advertising is everywhere – from billboards to product packaging, from online banners to classic flyers you get on the street, inviting you to cool events or parties. Its ever-presence in our lives can sometimes make even the simple act of strolling after a long day feel like walking through a giant shopping mall.

You can’t escape the feeling that every moment, every day, someone is trying to sell you something. We all know that advertising is useful for brands to attract customers and position themselves. As annoying as publicity, promotion and ads might feel to us, sometimes the industry gets it so right even the skeptics have to acknowledge it and tip their invisible hat as a kudos to their efforts.

I have prepared a selection of the 10 best advertisements and campaigns that not only go to great lengths in terms of creativity in order to sell or communicate, but also incorporate social, political and environmental issues in an unexpected way. Let’s discover them together!

Best Advertisements - I bet they will make you look twice! 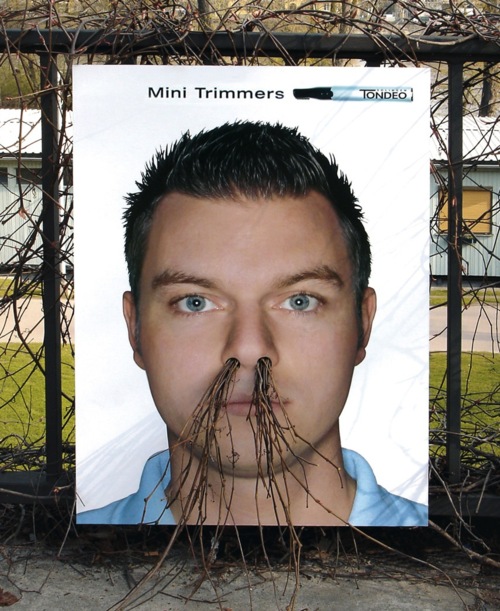 A touch of humor and guerilla advertising – what can go wrong? This print gets it so right because it doesn’t feel invasive – it doesn’t tell you that you need those mini trimmers now or any cliché phrasing to attract you, quite the opposite - it uses elements of the environment to involve both the product and the customer, while also getting a laugh from its target audience. Win-win. 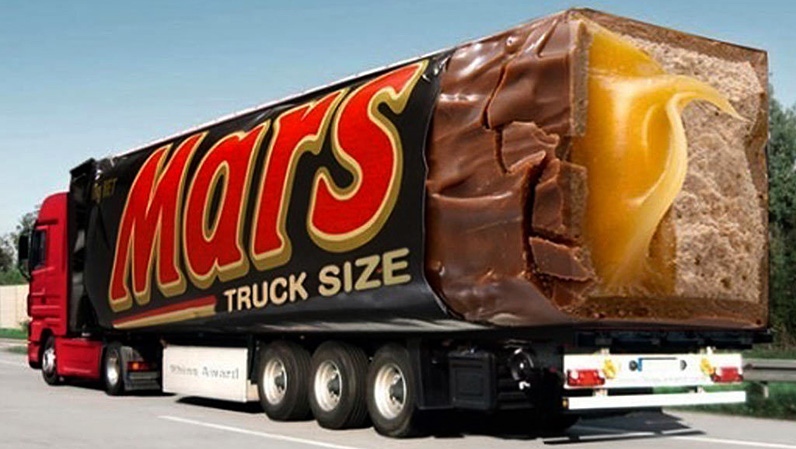 Another example of guerilla marketing, Mars’ decision to brand a truck for advertising purposes might seem like a common practice among brands, but the reason why this is particularly effective is the slogan – “Truck size” alongside the use of an actual truck to make an even stronger point – talk about promising a benefit and actually delivering to your customers. Nice work, Mars. 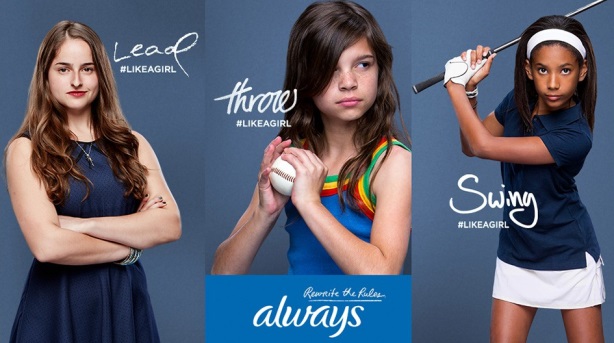 The entire Always campaign was meant to use gender stereotypes and successfully crush them. Redefining femininity and what it means to do something like a girl, the feminist undertones of this campaign turned it into more than just advertising, but into a movement that many women and young girls resonated with. Its underlying political and inclusive connotations elevated it into one of the best examples on how to integrate social issues into advertising and do it right. Bravo, Always. 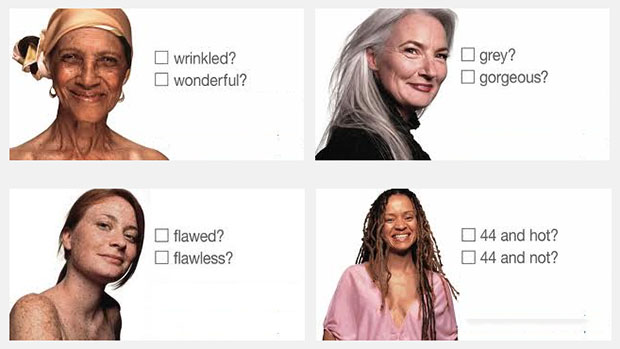 Dove is known for being a brand that supports crushing unrealistic standards of beauty and this campaign proves it – in a sea of competitors that promote women changing every part of themselves to fit the mold, a brand that celebrates different types of beauty is not just refreshing, but almost revolutionary in advertising. Just like Always, Dove integrates gender stereotypes whilst successfully crushing them and redefining what it means to be beautiful. This campaign shows that beauty is in the eye of the beholder and people quite often don’t see themselves as beautiful as they truly are – a very empowering message in an advertising industry that typically profits off of people’s insecurities. A big round of applause over here. 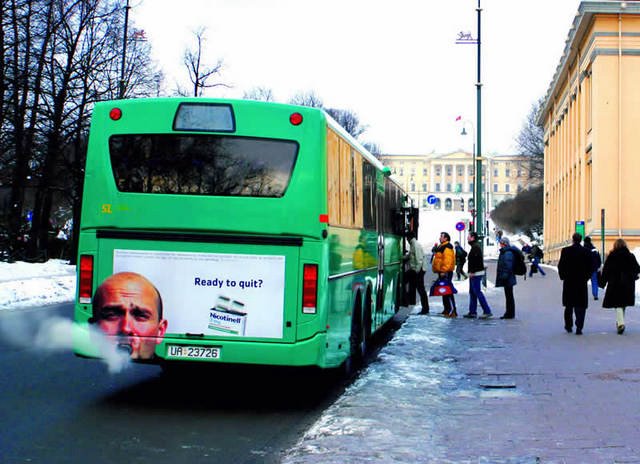 Nicotinell’s anti-smoking outdoor advertising approach is unique to say the least and it’s successful in delivering the message not just because of the creativity, but because of the means as well – a lot of people take the bus to commute and that ensures a large segment of the public being encouraged to quit smoking. An approach like this is a lot more effective than the typical messages we see on smoking packs that only aim to shock us and, for that reason alone, it is one of the best advertisements I’ve seen from an anti-smoking campaign. 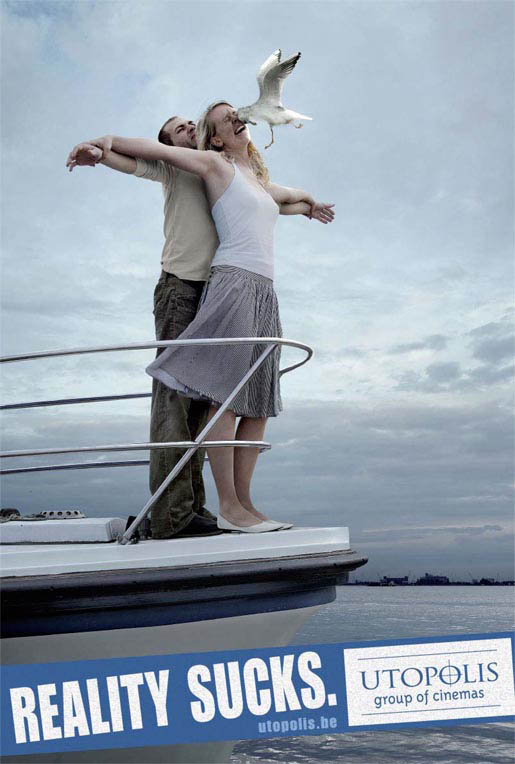 Another example of humoristic advertising, done by a cinema company – let’s face it, we typically pay more attention to the ads that make us feel something or simply make us laugh – this one pokes fun at the classics (Titanic) while also giving us a slogan that we can’t help but agree with. Reality sucks and movies don’t accurately depict reality – thanks for the harsh dose of honesty, Utopolis. 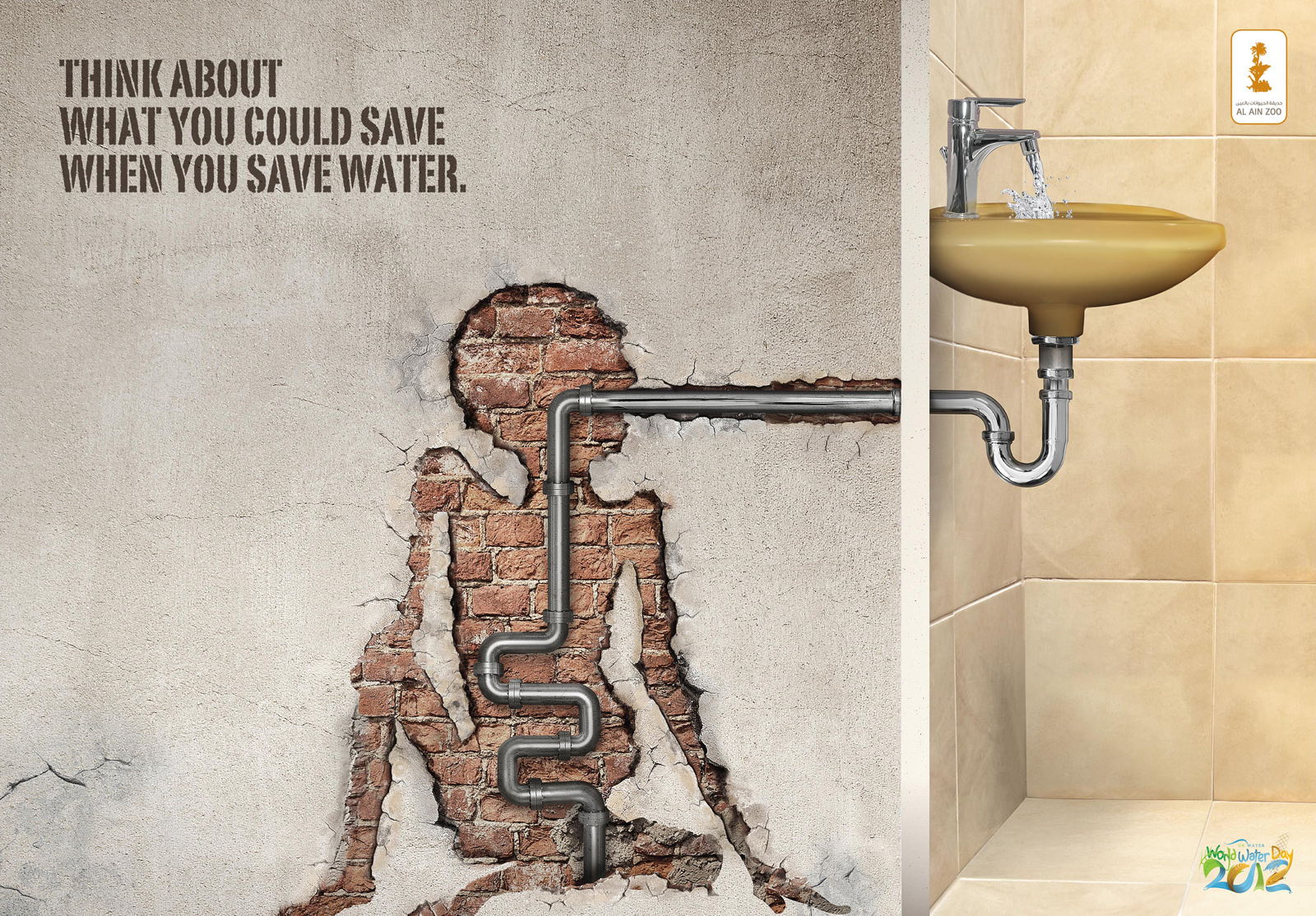 Unfortunately for advertisers, it’s clear that people pay less attention to environmental problems and it’s very tricky to make them aware of the impact of their behavior in a way that they’ll actually listen to. However, this print manages to get to the public by appealing to their emotional side in a very compelling way. Saving the environment, one powerful ad at a time. Not bad at all. 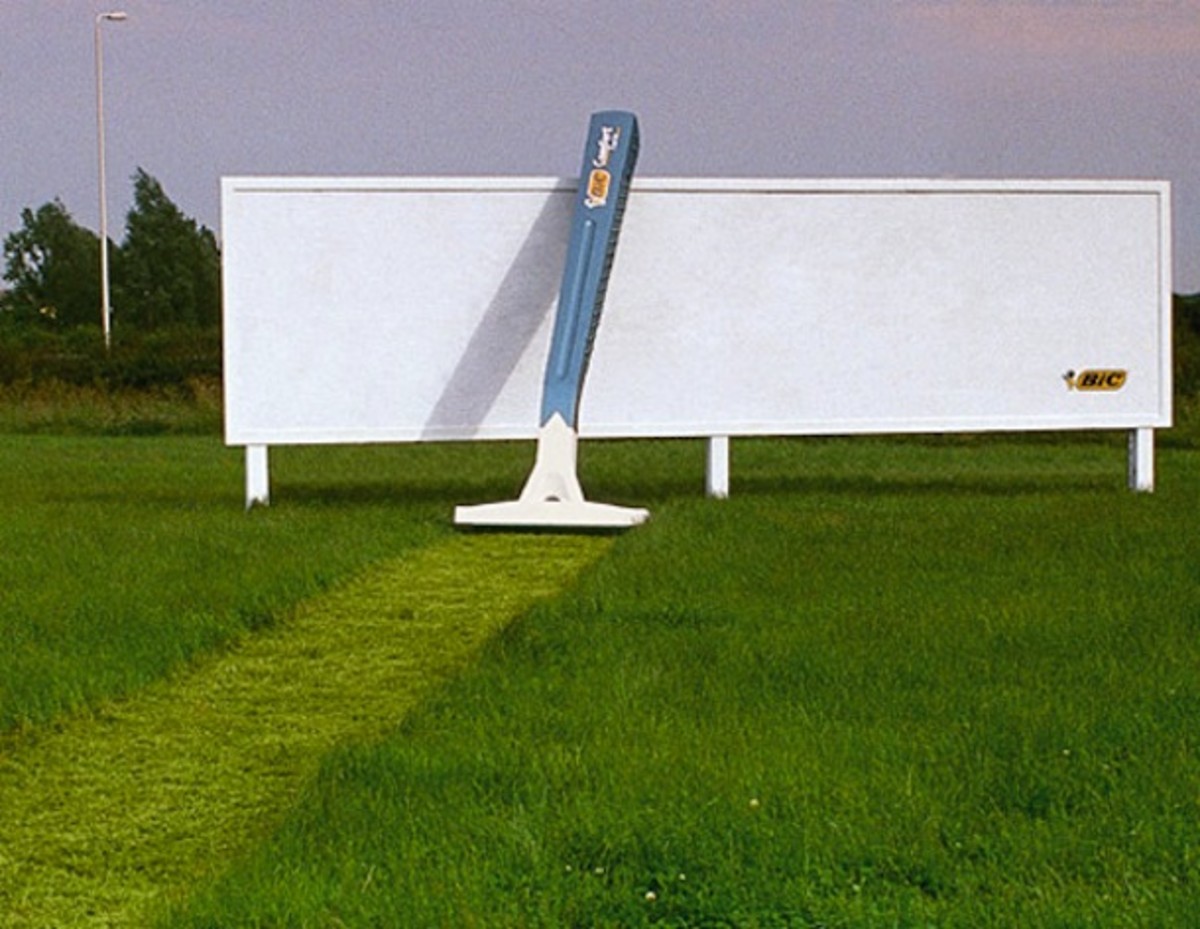 Sometimes showing the benefit of a product instead of explaining it is more effective, especially if you do it creatively by using elements of the environment and showing your product’s contribution in changing that environment- Bic understood that just right, coming up with a very clever approach.

This writer’s favorite brand must also be included in this list for…reasons. Bear with me, I also have arguments, aside from my personal attachment to it. This ad is not just creative (the use of the ladder and the straw, especially) but, like most Coca Cola ads, it’s refreshing and it manages to capture the essence of the brand perfectly – it’s not invasive, it doesn’t ever position itself as being superior to the customer - the brand is your break from work, your partner in crime, your moment of quiet and relaxation, your friend even. 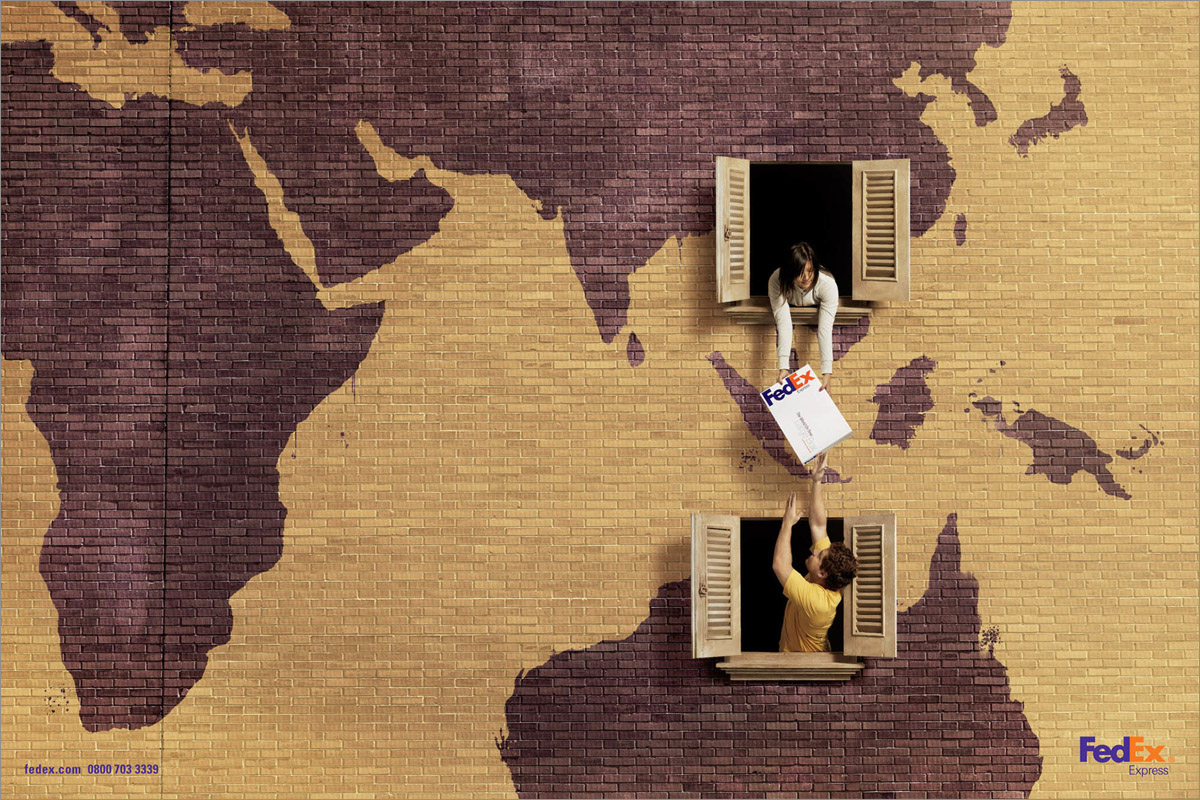 This print is fairly simple but brilliant in execution – it shows the benefits of the shipment service in an innovative way, indirectly assuring customers that they can safely send and receive from all over the world, as if they were just a floor apart – subtly alluding to the brand’s efficiency and time-saving policy.

What do you think I missed in my best advertisements and campaigns list? What other campaign or ad would you have included and what’s your favorite brand or print?

I'd love to hear your thoughts! 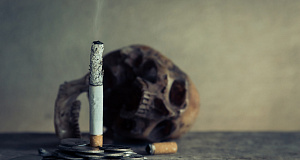 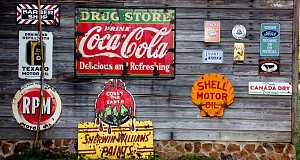